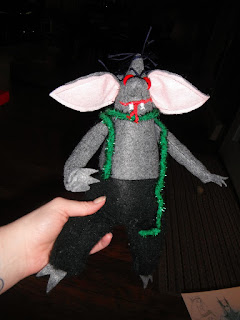 The kallikantzaros (Greek: Καλλικάντζαρος; Bulgarian: караконджул; pl. kallikantzaroi) is a malevolent goblin in Southeastern European and Anatolian folklore. Stories about the kallikantzaros or its equivalents can be found in Greece, Bulgaria, Serbia, Bosnia and Turkey. Kallikantzaroi are believed to dwell underground but come to the surface during the twelve days of Christmas, from 25 December to 6 January (from the winter solstice for a fortnight during which time the sun ceases its seasonal movement). 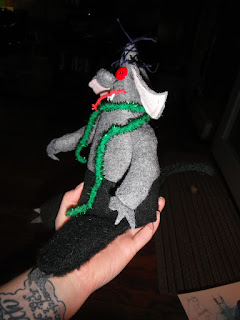 There is no standard description of the appearance of kallikantzaroi; there are regional variations in how their appearance is described. Some Greeks have imagined them with some animal parts, like hairy bodies, horse legs, or boar tusks; sometimes enormous, other times diminutive. Others see them as humans of small size that smell horrible. They are predominantly male, often with protruding sex characteristics. Many Greeks have imagined them as tall, black, hairy, with burning red eyes, goats' or donkeys' ears, monkeys' arms, tongues that hang and heads that are huge. Nonetheless, the most common belief is that they are small, black creatures, humanoid apart from their long black tails. The shape of the kallikantzaros is said to resemble that of a little, black devil. They are, also, mostly blind, speak with a lisp and love to eat frogs, worms, and other small creatures.

Another supposed method of protection from kallikantzaroi was to leave the fire burning in the fireplace, all night, so that they could not enter through it. In some areas, people would burn the Yule log for the duration of the twelve days. In other areas, people would throw foul-smelling shoes in the fire, as the stench was believed to repulse the kallikantzaroi and thus force them to stay away. Additional ways to keep them away included marking one's door with a black cross on Christmas Eve and burning incense.

According to legend, any child born during the twelve days of Christmas was in danger of transforming to a kallikantzaros during each Christmas season, starting with adulthood. It was believed that the antidote to prevent this transformation was to bind the baby in tresses of garlic or straw, or to singe the child's toenails. According to another legend, anyone born on a Saturday could see and talk with the kallikantzaroi.

One particularity that set the kallikantzaroi apart from other goblins or creatures in folklore was that they were said to appear on Earth for only twelve days each year. Their short duration on earth, as well as the fact that they were not considered purely malevolent creatures but rather impish and stupid, led to a number of theories about their creation. One such theory connects them to the masquerades of the ancient Roman winter festival of Bacchanalia, and later the Greek Dionysia. During the drunken, orgiastic parts of the festivals, people wearing masks, hidden under costumes in bestial shapes yet still appearing humanoid, may have made an exceptional impression on the minds of simple folk who were intoxicated.

In Greek, the term kallikantzaros is also used to describe a number of other short, ugly and usually mischievous beings in folklore. When not used for the above-mentioned creatures, it seems to express the collective sense for the Irish word leprechaun and the English words gnome and goblin.

Please make sure you know the basics to sewing for this craft.
Instructions